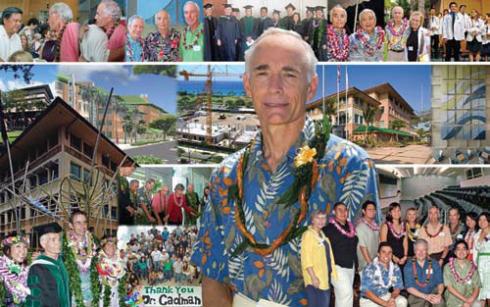 Dr. Cadman joined the medical school at a critical time in 1999. Resources at JABSOM had been cut and there was talk of closing the school.

Cadman inspired faculty and students "to be the best medical school in the world with an Asia-Pacific focus," and led JABSOM's physical and academic renaissance.

As the driving force behind the creation of the new facilities in Kakaʻako, he envisioned a school that would foster a vibrant biotechnology industry in our state. In only five years under his leadership, JABSOM completed its new campus and experienced unprecedented growth in biomedical research.

In 2005, Dr. Cadman stepped down as dean after learning that he suffered from Primary Progressive Aphasia (PPA), a rare degenerative condition that robs those it strikes of the ability to articulate thoughts in speech or writing. There is no cure for PPA. Having served as a faculty member since 2005, Dr. Cadman retired on October 31, 2009.

To commemorate his service to JABSOM, and the scientific and technological future of this state, a fund in his name has been established.

Additional gifts to this fund will enable JABSOM to endow a professorship and heighten the stature of JABSOM as a recognized center for research in neurodegenerative diseases, like PPA.

What better way to pay tribute to Dr. Cadman than to advance biomedical research in a subject which may ultimately help find a cure for PPA.