“I want to help students learn how to contribute in justice controversies. I bring all my experiences to bear and try to get the students engaged. It’s not just law on the books but law in real life.”

Eric Yamamoto's congenial and chatty tone develops a certain reverence when the topic turns to his being chosen for the UH Mānoa's prestigious new professorship – the Fred T. Korematsu Professor of Law and Social Justice.

“It has a lot of substantive meaning, and it is very special to me. It embodies my ideals, my values and my struggles,” says Yamamoto (BA ’74 Mānoa). “I’m exhilarated to have that professorship, but with it I feel a strong commitment to keep that legacy going.”

Indeed, Korematsu’s legacy is steeped in history and responsibility. Korematsu stood up to injustice when, as one of 120,000 Japanese Americans during World War II, he refused to be relocated to the internment camps. He was jailed and would go on to challenge “racial exclusion” at the Supreme Court level. Although the Court ruled against Korematsu in 1944, he earned respect for his courage and strength in challenging the infringement of civil liberties. 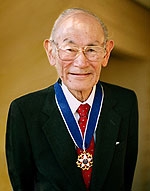 In 1984 a group of young attorneys, including Yamamoto, asked for the case to be reopened and re-examined. New information had surfaced regarding fraudulent evidence and government misrepresentation about the military necessity of internment. This time, they won. Reparation payments and official apologies from the U.S. government were issued to those who were wrongly incarcerated.

After the case, Yamamoto spent six months in a San Francisco coffee shop writing about and reflecting on the event that would set the stage for his career. "I wanted my work to focus on reconciliation work. That is, social healing through justice," he says.

Yamamoto, who has taught at the William S. Richardson School of Law since 1985, is an experienced, thoughtful lawyer and professor. He is immediately articulate and knowledgeable about any issue that hints of social injustice. But rather than dwell on the awards and accolades connected to his advocacy work and teaching (eight Outstanding Law Teaching Awards, the Society of American Lay Teachers' Outstanding Teacher Award in 2006, and many others) he prefers to talk about raising up leaders.

“I want to help students learn how to contribute in justice controversies,” he says. “I bring all my experiences to bear and try to get the students engaged. It's not just law on the books but law in real life.”