A passion for severe weather phenomena, especially supercell thunderstorms and tornadoes, inspired Jonathan Merage to support the University of Hawaiʻi’s research in Hawaiʻi and Colorado, including some groundbreaking studies on torrential rainfall, lightning, and severe thunderstorms.

Now Merage is expanding his support to fund two new studies that aim to help meteorologists better understand the structures and processes of destructive supercell thunderstorms and the role that terrain can play in the generation of mesocyclones, a precursor to most deadly tornadoes.  A mesocyclone is a persistent, rotating updraft that characterizes supercell thunderstorms.

Six years ago, Jonathan Merage began a long-term partnership with the UH Mānoa School of Ocean and Earth Science and Technology to fund research into how long-range lightning data can potentially improve storm forecasting. Merage has given more than $600,000 to SOEST since then and his latest gifts will boost the total to more than $800,000.

“I have always been fascinated by supercell thunderstorms and tornadoes and it’s been a privilege to be able to work together with SOEST scientists and students in conducting research in the field and furthering our mutual interests,” said Jonathan Merage.

Dr. Steven Businger, Professor in the Atmospheric Sciences Department at UHM and the projects’ lead, and his associates conducted field experiments in Colorado, where Merage has a ranch south of Denver. Their latest investigation, “The anatomy of a series of cloud bursts that eclipsed the U.S. rainfall record,” was published in Monthly Weather Review in April 2022. It detailed the essential role of steep mountainous terrain in producing a series of supercell thunderstorms that stalled out over Kauaʻi in April 2018.

The work helps meteorologists better predict dangerous storms. It also helped graduate student TJ Corrigan fulfill his Ph.D. requirements and opened educational opportunities for schoolchildren to learn about thunderstorms and lightning. The manuscript is the result of a grant from the Merage Foundation to study the relationship of mesocyclones and terrain. 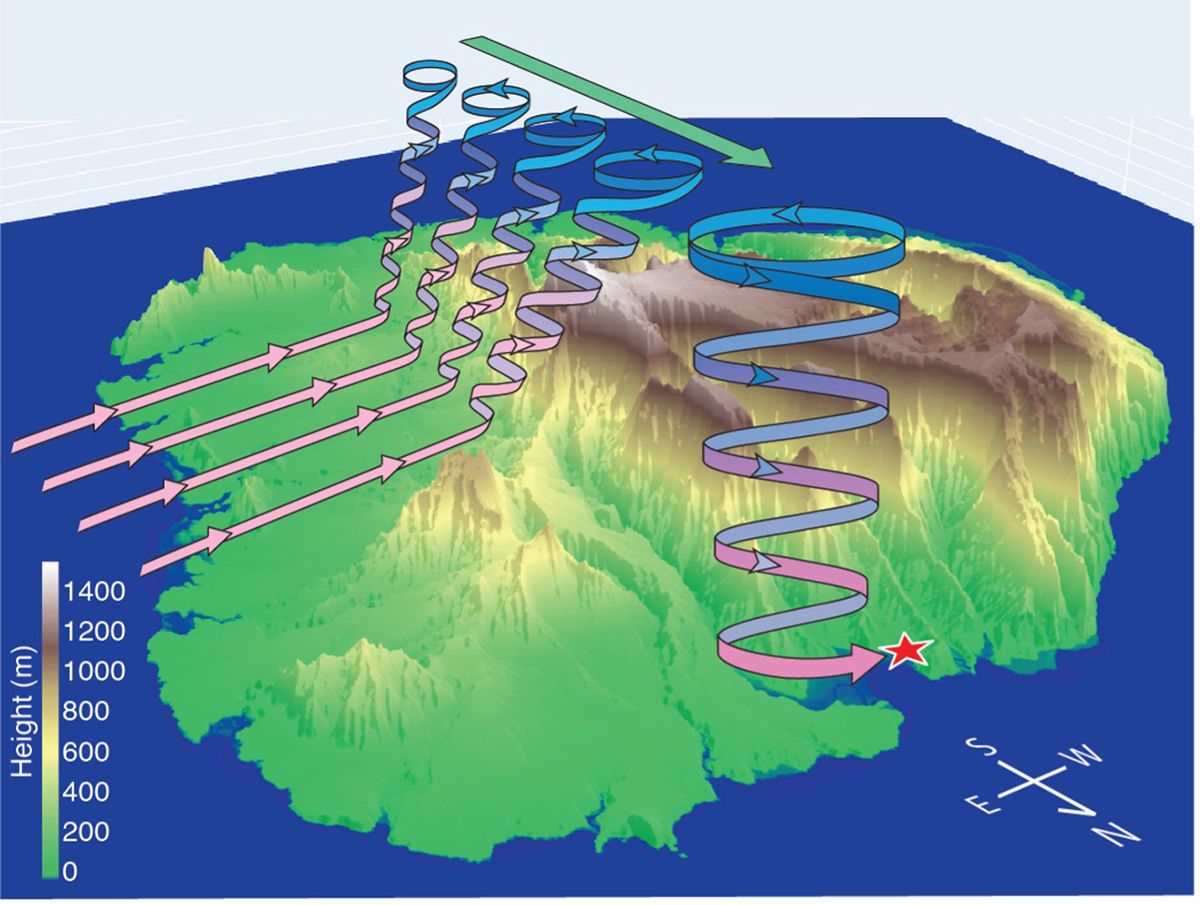 Conceptual model of the terrain organized flow that produced a rain bomb in 2018.

The mesocyclones increased the intensity of precipitation over Hanalei, thus breaking the all-time 24-hour rainfall record for the US. Significantly, mesocyclones are a signature of supercell thunderstorms and are often precursors of deadly tornados.

Some of the research Businger’s team has done in collaboration with Merage has been at his ranch near the Colorado Front Range, which is the first mountain range encountered when traveling west across the central high plains of Colorado. Businger and his team released ballast-controlled storm balloons to gather data on thunderstorms tracking east from the Front Range where they first form.

“In talking with Jonathan, I proposed that we study the relationship between wind shear and terrain, something that no one has looked at closely,” Businger said. “I think it's very apropos to the Front Range, because the slope of Colorado’s front range is steep just like Hawai‘i’s pali or cliffs.” 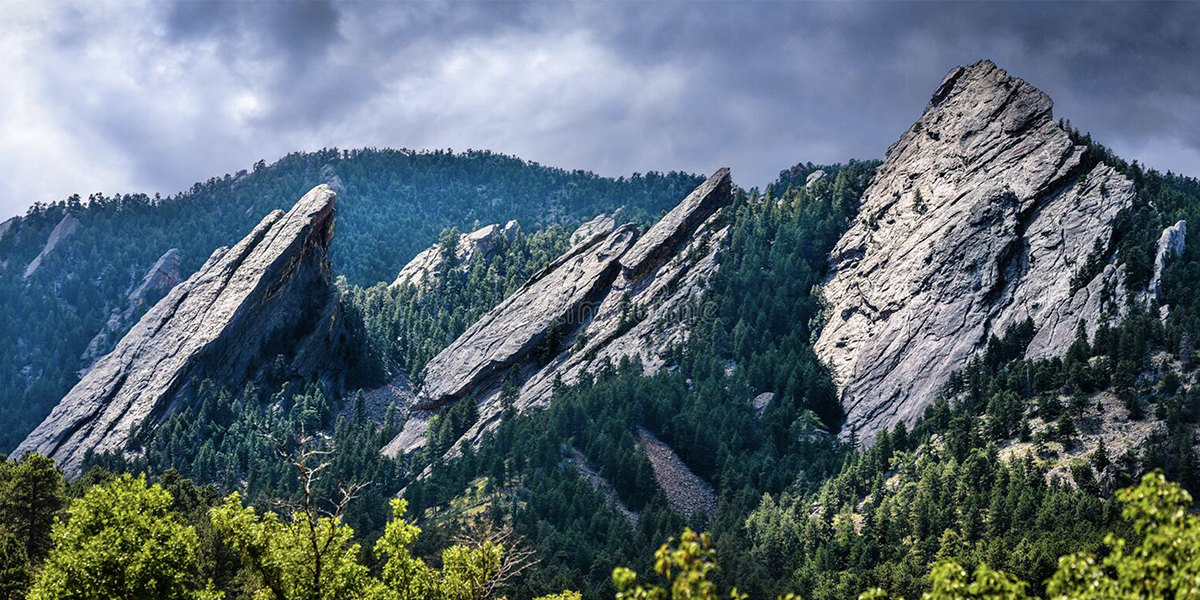 “Thunderstorms that are triggered along the Front Range move over the high plains and often evolve into active supercell thunderstorms,” Businger said. “I suggested to Jonathan that we study these evolving storms with a combination of balloon-borne instruments, stereo-camera systems that track the cloud-level winds, and isotope analysis.”

The other new grant Merage funded takes a novel approach to studying supercells by analyzing the isotopic composition of rainwater. By measuring the changing chemistry in supercells, scientists hope to trace the history and intrinsic properties of air currents as they traverse through different areas of the storm. Data collected by the team in May 2022 will be used to investigate how wind shear evolves and eventually leads to tornadogenesis. 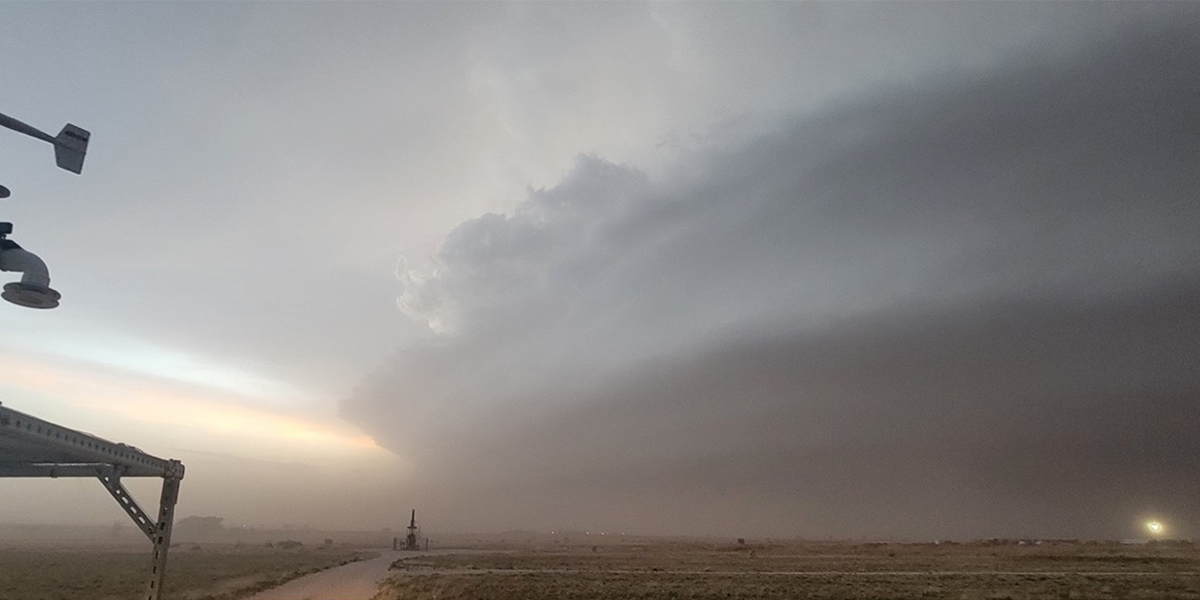 Large tornadic supercell and mesocyclone with striations in the upper Texas Panhandle on May 23 sampled by mobile mesonet within the powerful inflow region. This storm produced multiple tornadoes and formed in the Texas Permian Basin, an area known for creating powerful rotating updrafts in part due to orographic effects and terrain features.

“The overarching goal of Merage’s support is to improve forecasting of supercell thunderstorms, through careful deployment of novel observing systems, through analytical work to see what factors are important, and then through application of a numerical model with idealized terrain to evaluate these factors, Businger said.

“Step by step, we gradually build up our understanding of the interaction of thunderstorms and mountains, so that eventually, we have a full-physics weather model that is better able to predict evolving supercell thunderstorms.” he said. “That's a pretty far-reaching goal. It could save lives.