"Dr Karl's innovative research has lead to a greater understanding of microbial life in the ocean, which modulates the respiration and health of our planet.

A member of the National Academy of Sciences and winner of numerous awards, Dave is one of the nation's most acclaimed ocean scientists." 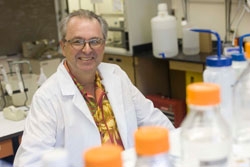 Dr. David Karl, is the founder of the Center for Microbial Oceanography: Research and Education (CMORE) at SOEST. He has focused his research on the ecological role of microorganisms in the oceans, ranging from the sunlit surface waters to the deep abyss. Karl is known for his groundbreaking efforts to promote collaborations among the previously separate disciplines of oceanography, microbiology, ecology and genomics to better understand the sea, including its potential response to environmental variability and climate change.

In 2008 Professor David Karl was named the recipient of a $3.79 million grant from the Gordon and Betty Moore Foundation to continue and expand research on the microbial inhabitants of the world's oceans. This grant builds on earlier support of Dr. Karl's work to quantify solar energy capture and transduction, and to gain an improved understanding of essential bioelemental cycles and sequestration of atmospheric carbon. 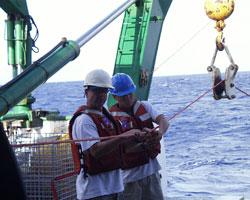 As one of seven Marine Microbiology Senior Investigators selected for outstanding contributions to the field of marine microbial ecology, Dr. Karl received a $3.15 million grant from the Gordon and Betty Moore Foundation in 2004. The Senior Investigator Program is part of the Gordon and Betty Moore Foundation's 10-year, $145 million Marine Microbiology Initiative, which aims to accelerate the creation of new knowledge regarding the composition, function and ecological role of microbial communities in our oceans.