Besides her mother, Teresa Morishita (left) also feels her father (right) played an integral role in her life and career. Photo by W. Lum

Teresa Morishita grew up taking care of dogs, chickens, rabbits, and a pair of geese named Georgie and Gertrude. Dreaming of being a veterinarian, she planned to attend college in the continental United States to achieve her goal. The senior at Maryknoll School had acceptance letters and her parents’ full support for a mainland school but her mother also suggested she connect with Allen Miyahara, a pre-vet advisor at the University of Hawai‘i at Mānoa, to learn about options at UH.

“He took his time when I was still in high school to show me what my pre-vet course plan would be like if I came to UH,” says Morishita. “He showed me how to balance my hard science courses with other courses and emphasized how much money I would save as an in-state student. So I chose UH Mānoa, and it was a great experience.”

Learning with piglets and milk-cows

After Miyahara retired in her freshman year, Teresa was fortunate to be guided by Robert Nakamura. She says, “The UH Animal Science faculty guided me in my academic progression, but more importantly, they showed concern for students so we could forge ahead with our career goals.”

She remembers eating the chicken wing special at Hamilton Cafeteria and Keo’s Thai food in the East-West Center with her classmates—both eateries long gone—the koi pond, hanging out with friends, the relaxing environment, and going to football games at Aloha Stadium. She adds, “The teachers were really good, especially in animal science and botany. There was lots of hands-on learning, which is different from many academic institutions. We had Saturday field trips, and the school had a food animal farm on the North Shore at Waiale‘e where we would stay for a couple of weeks milking cows and handling newborn little piglets. Hands-on learning reinforced what we learned in class.”

Dr. Morishita’s career has led her far from her island home. After receiving her BS and MS in Animal Science at UH Mānoa, she earned doctoral degrees at the University of California at Davis. She has since worked in academia and private practice in Ohio and California, recently as Associate Dean for Academic Affairs at Western University of Health Sciences’s College of Veterinary Medicine. Still, she returns home every year (sometimes even more!), and the University of Hawai‘i has remained in her heart.

Morishita says she’s been very fortunate in her career: “My parents taught me that whenever you receive blessings, you should help others in return.” This is why she has committed part of her estate to establish the Dr. Teresa Y. Morishita, DVM, PhD Endowed Scholarship. Students in animal sciences or pre-veterinary medicine at UH Mānoa will find the burdens of tuition eased by an alum whose connection to her alma mater spans distance and time.

“When I was going to school,” she says, “financial aid was very helpful. While my parents helped me tremendously, I received support from the Charles Reed scholarship, Pacific Egg and Poultry scholarships, and a scholarship from the Daughters of the American Revolution. They helped a lot, as did my work as a student in James Carpenter’s lab. It gave me experience in animal nutrition, and it also paid. It’s much harder nowadays to work and go to school, as everything is so expensive—hopefully this scholarship will help students.” 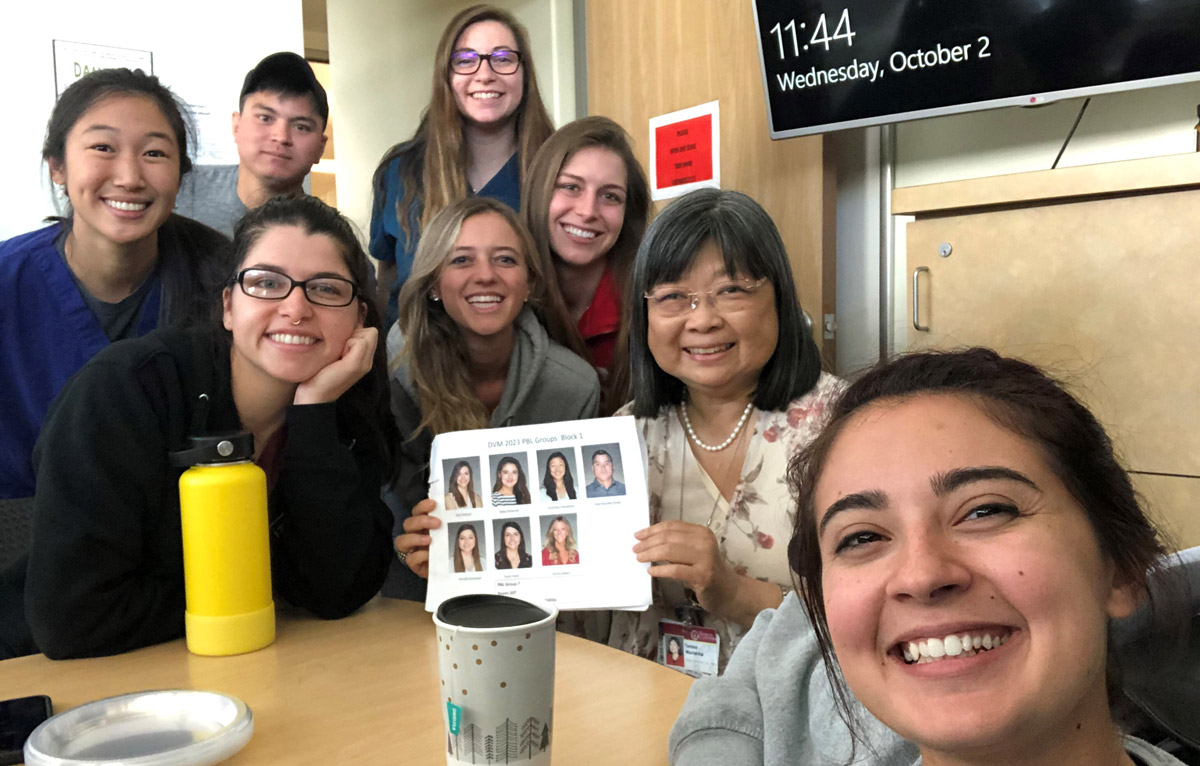 Dr. Teresa Morishita with some of her Western University of Health Sciences’ College of Veterinary Medicine students. Photo by K. Hallam