Most collegiate sports compete for a season, but cheerleading is year-round. “This team works from August 5 to May 5, making it the longest season – by far – of all the sports,” says coach Mike Baker.  “Our team performs at the games, but we also have our own competitions.  Finishing seventh in nationals in 2017 and fifth in 2018 means we attract five-star athletes from across the country, but just getting to nationals is a challenge.”

When diehard fans of UHM athletics learned that the cheer team raises its own funds to attend competitions or to travel in support of other teams, they put their fandom into action.  “These supporters thought it was unfair for such treasured members of the Rainbow ‘ohana to stress about paying to serve their school in so many ways,” says Kimo Kai, Associate Athletics Director for Philanthropic Partnerships.  “In response, they established the Over the Rainbow University of Hawai‘i Cheer Fund.” 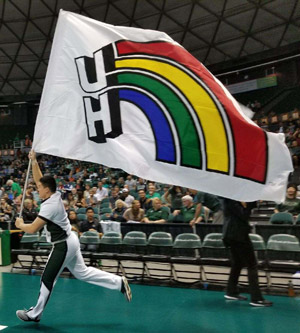 The new fund assists with expenses for textbooks, team meals, coaches’ recruiting trips, uniforms, and travel to cheer camps and national competitions when these costs are not covered by the university.

Baker says, “This endowment will help level the playing field for the University of Hawai‘i cheer team to compete nationally. Our nationals are located in Orlando, Florida. We are the furthest collegiate cheer team from Orlando, a huge disadvantage when competing with teams traveling 25 minutes from their campuses to the venue. This endowment helps to ensure UH stays competitive every year while serving as ambassadors for the university on and off the court.”

“Cheerleaders create enthusiasm for the fans and team,” says one donor, “but the games lack energy when the cheerleaders aren’t there.”

Because it takes more than a few fans to support a team, a small group of enthusiastic supporters asks alumni and other devotees to add their voices.  Through the years, the Mānoa cheerleading team has literally bent over backward for its teams and fans.  A donation to the Over the Rainbow Fund is the perfect opportunity to offer a cheer in return.