Bernard and Pamela Lum were best friends and soul mates who shared a life full of love and laughter, traveling together abroad, enjoying good food and friends, and cheering for the University of Hawaiʻi’s basketball teams.

Bernard Heong Kin Lum was born in Honolulu and graduated from Kaimuki High School. He majored in accounting at UH Mānoa and continued to earn an MBA while working as a graduate teaching assistant at the School of Accounting.  In 1974, he became a certified public accountant and launched his career at Peat Marwick Mitchell & Co. — now KPMG — and after a long career in finance with G.W. Murphy Construction, a large Waikiki hotel and First Hawaiian Bank, he retired in 2011.

Pamela Reiko Lum was born in New York City and graduated from Mount Vernon High School before attending the City College of New York, where she graduated with a bachelor of arts degree. After working for a publishing house in New York City for a while, she moved to Honolulu and spent 30 years working for what is now Territorial Savings Bank. She worked her way up from administrative assistant to treasurer and CFO, retiring the same year as Bernard.

Pamela and Bernard met on a blind date set up by a mutual friend. The two had met their perfect match in one another and they married in 1983. Upon reflecting on his marriage, Bernard shared, “I was blessed to have had a loving wife, best friend, and soul mate throughout our more than 33-year marriage … We enjoyed a lifetime of experiences together, whether it was traveling internationally, attending University of Hawaiʻi men's and women's basketball games, sharing meals as aspiring foodies, taking in a foreign film, or just going for long walks.”

And lovingly, Pamela felt the same way describing Bernard as someone “with an abundance of love and kindness, along with a hilarious sense of humor.” From all they shared while reflecting on their lives, there is an overwhelming sense of joy and contentment and it is no surprise to learn that they made it a priority to support the causes that were most important to them. 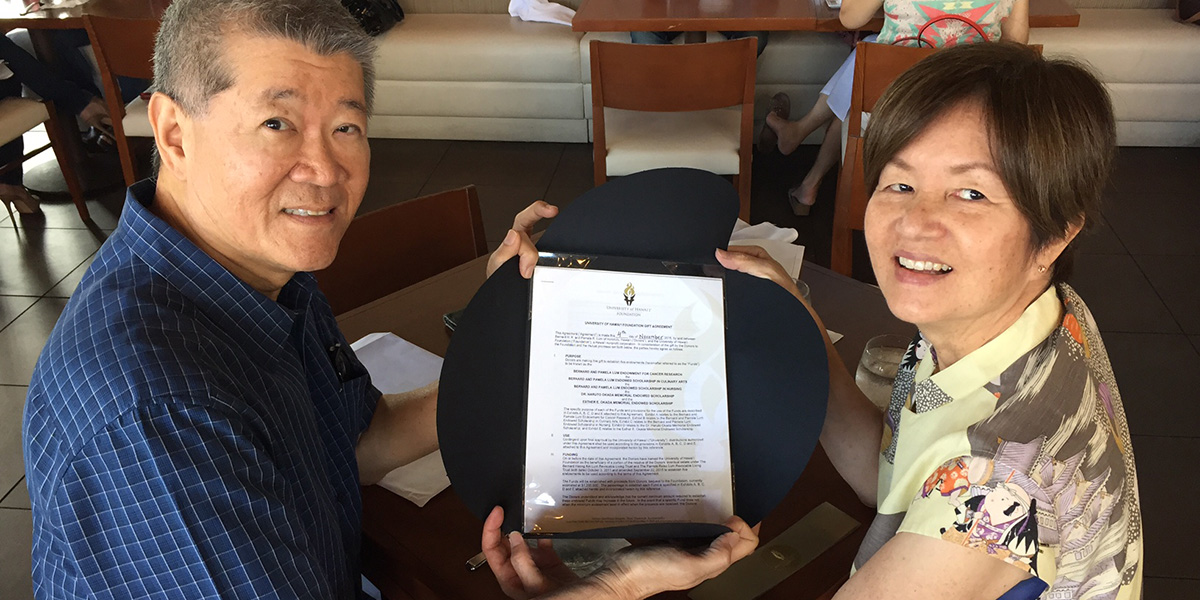 Having both battled cancer, it was important to them to create several endowed scholarships during their lifetime including the Bernard and Pamela Lum Endowment for Cancer Research at the UH Cancer Center and the Dr. Haruto Okada Memorial Endowed Scholarship at the UH Mānoa John A. Burns School of Medicine, named for a physician who practiced in Honokaʻa on Hawaiʻi Island who was the father of Pamela’s best friend, Esther.

Sadly, Pamela passed away in 2016 with Bernard by her side, hopeful to see her loved ones who had departed before her and taking solace that her and Bernard would be reunited again. Five years later, in December 2021, Bernard passed away. In his final days, Bernard shared “I was given the gift of life and did my best to make the most of it, knowing that someday my time would be up, and I would have to give it back ... Life on Earth is short, so make the most of it and enjoy it as much as possible.”