Dayday and Kevin with their grandchildren.

A scholarship has been endowed as a memorial to Margarita “Dayday” Hopkins by her husband of 48 years, a retired professor from the University of Hawaii at Hilo’s College of Agriculture, Forestry and Natural Resource Management. The purpose of the endowment is to carry on his late wife’s work championing agricultural and Filipino communities in Hawaiʻi as, after family, helping those communities was the focus of her life. 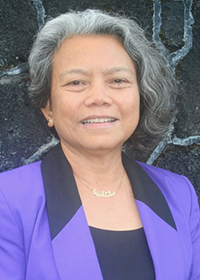 The Margarita “Dayday” Hopkins Scholarship is open to any full-time undergraduate student pursuing a bachelor’s degree in agriculture or a related field at the College of Agriculture, Forestry and Natural Resource, with preference given to students interested in the contribution of Filipinos and Filipino-Americans to Hawaii’s agriculture.

Dayday passed away on Nov. 6 after battling ALS for four years. She was 71.

She was born Margarita Leyson in Maasin, the Philippines, one of three daughters, and given the nickname Dayday, which means “little one.” She attended St. Joseph’s College there on a scholarship, earning a bachelor’s degree in accounting.

After graduation, Dayday moved to the island of Mindanao where she met her future husband, a U.S. Peace Corps volunteer, Kevin Hopkins, working in the same fisheries office as her sister.  They were married after a short courtship of only 5 months. She enrolled in a master’s degree program in agricultural economics at Xavier University studying the marketing practices of small-scale fishermen. She also worked for Peace Corps as a language instructor.

After Kevin’s Peace Corps service was complete, the couple moved to Alabama, where Kevin received a master’s degree and a doctorate in fisheries and aquaculture and an MBA from Auburn University. Dayday was the first woman of color appointed to a research associate position in Auburn’s Department of Fisheries and Allied Aquaculture and conducted the first organized sales of tilapia in the United States.

Dayday had told Kevin that he had four years to complete his graduate degrees. Four years to the day after leaving the Philippines for Alabama, they returned. Dayday taught at Central Luzon State University for two years before the family relocated again to Kuwait. She worked for 3.5 years with the Kuwait Institute for Scientific Research conducting fisheries economics research and developing markets for tilapia. Their travels continued when they moved to Oregon, where Dayday completed coursework for a Ph. D. in agricultural economics at Oregon State University.

Dayday and Kevin in Bangladesh

In 1988, she and Kevin moved to Hilo, where Kevin became a professor in the College of Agriculture, Forestry and Natural Resource Management at UH Hilo. Dayday was hired as an economic development specialist by the County of Hawaii, responsible for its agriculture and natural resources programs, and later became head of the county’s Department of Research and Development. She retired from the county in 2012 after 23 years of public service.

Dayday was very active in other forums and served on several state commissions and boards including the Agribusiness Development Corporation. She was particularly active in Filipino organizations and was president of the statewide Congress of Visayan Organizations. She served on disaster relief missions as a logistics coordinator and felt working on political campaigns was an important part of being a good citizen. She was the recipient of many awards including being inducted into the Midpac Hall of Fame by the Hawaiʻi Export Nursery Association, which lists many of her accomplishments on its website.

Dayday loved teaching. She was a UH Hilo lecturer in economics and ag business. Unfortunately, ALS robbed her of her ability to speak and the use of her hands, ending her teaching career. She continued to help her husband with his research and consulting work by using a computer system controlled by her eyes. They have three children, daughters Leyson and Alyxandra and a son, Shanon, and 11 grandchildren.