A world-class innovation and entrepreneurship center being built on the site of the former Atherton YMCA will receive $500,000 in support. Hawaiian Electric Industries (HEI) and American Savings Bank (ASB) have each committed a $250,000 gift to the University of Hawai‘i Foundation for the live-learn-work community at RISE — Residences for Innovative Student Entrepreneurs, which will be operated by the Pacific Asian Center for Entrepreneurship (PACE) at UH Mānoa’s Shidler College of Business.

“We are delighted to have the support of Hawaiian Electric Industries and American Savings Bank in our community because a large component of the success of RISE depends on private and community partnership,” Shidler College Dean Vance Roley said. “RISE will be accessible to all UH student entrepreneurs to develop themselves within an ecosystem of interdisciplinary collaboration and experiential learning. This type of private investment will stimulate long-term innovation and economic diversity in Hawai‘i.”

“HEI is thrilled to continue our ongoing partnership with PACE and the University of Hawai‘i,” said Connie Lau, HEI president and CEO. “RISE will be home to Hawai‘i’s next generation of innovators and entrepreneurs. These future leaders are the catalysts that will help us build a better Hawai‘i.”

“American Savings Bank is proud to support PACE’s efforts to cultivate and prepare students for careers in research, innovation and entrepreneurship—areas that are key to diversifying Hawaiʻi’s economy,” said Ann Teranishi, ASB president and CEO. “We are excited for this new era for the University of Hawai‘i and share its commitment to develop our state’s future leaders and entrepreneurs.”

HEI and its subsidiaries are longtime supporters of PACE and its programs. ASB in 2014 gave $100,000 to PACE as part of a $3 million fundraising initiative to create new programs and expand existing ones, while HEI, Hawaiian Electric and ASB have supported the UH Venture Competition at PACE with an annual gift each year since 2015.

“We’ve had a long-standing partnership with Hawaiian Electric Industries and American Savings Bank. Since 2015, they have served as rotating title sponsors of our UH Venture Competition, in addition to volunteering countless hours to serve on our boards, and as judges, instructors and mentors for our various programs. We are incredibly grateful for their continued support of our student entrepreneurs,” PACE Executive Director Sandra Fujiyama said. “We are excited to see the RISE project come to fruition as it will be a hub for ideas to grow into diversified solutions that will have a positive impact on our state and residents.”

Demolition of the existing Mary Atherton Richards House at the corner of University and Seaview avenues began in September and is scheduled to be completed this month. Interior demolition of the historic Charles Atherton House and its additional wings will follow. Groundbreaking on the new six-story modern building, which will wrap behind the historic pink Charles Atherton House, is scheduled for January 2022. When completed in 2023, RISE will have 7,263 square feet of multi-purpose co-working, meeting, lab and classroom space, as well as 374 dormitory beds for undergraduate and graduate students.

The pair of gifts from HEI and ASB are among the largest corporate gifts toward the UH Foundation’s goal of raising $3 million to fund the RISE center’s furnishings, fixtures and equipment, along with operational programs and student scholarships over the first 10 years.

The $70 million project is being developed by a public-private partnership between UH, Hunt Development Group and UH Foundation, which purchased the one-acre site in 2017 for $8 million. The tax-free bond financing will be repaid using dormitory fees; no taxpayer funds are being used for the project.

Moss is the general contractor on the project, The Wilhelm Group is the construction manager and Design Partners Inc. is the lead architect. 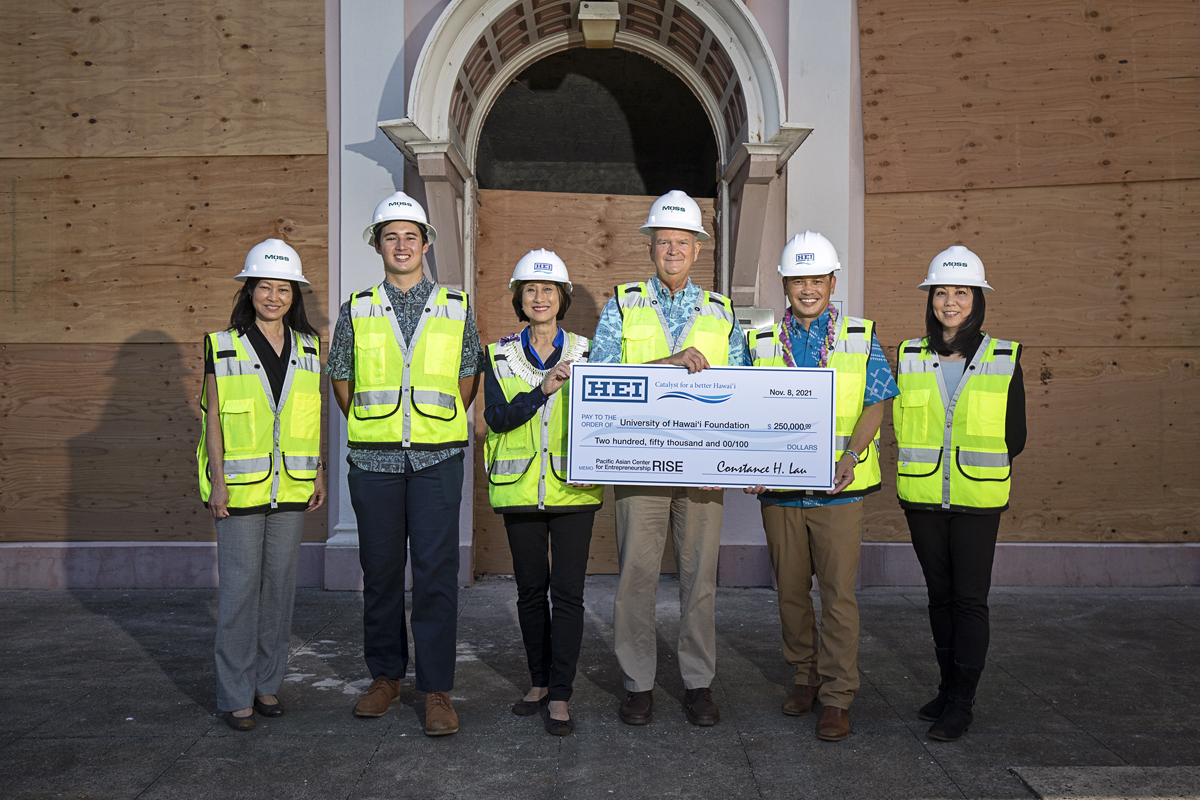 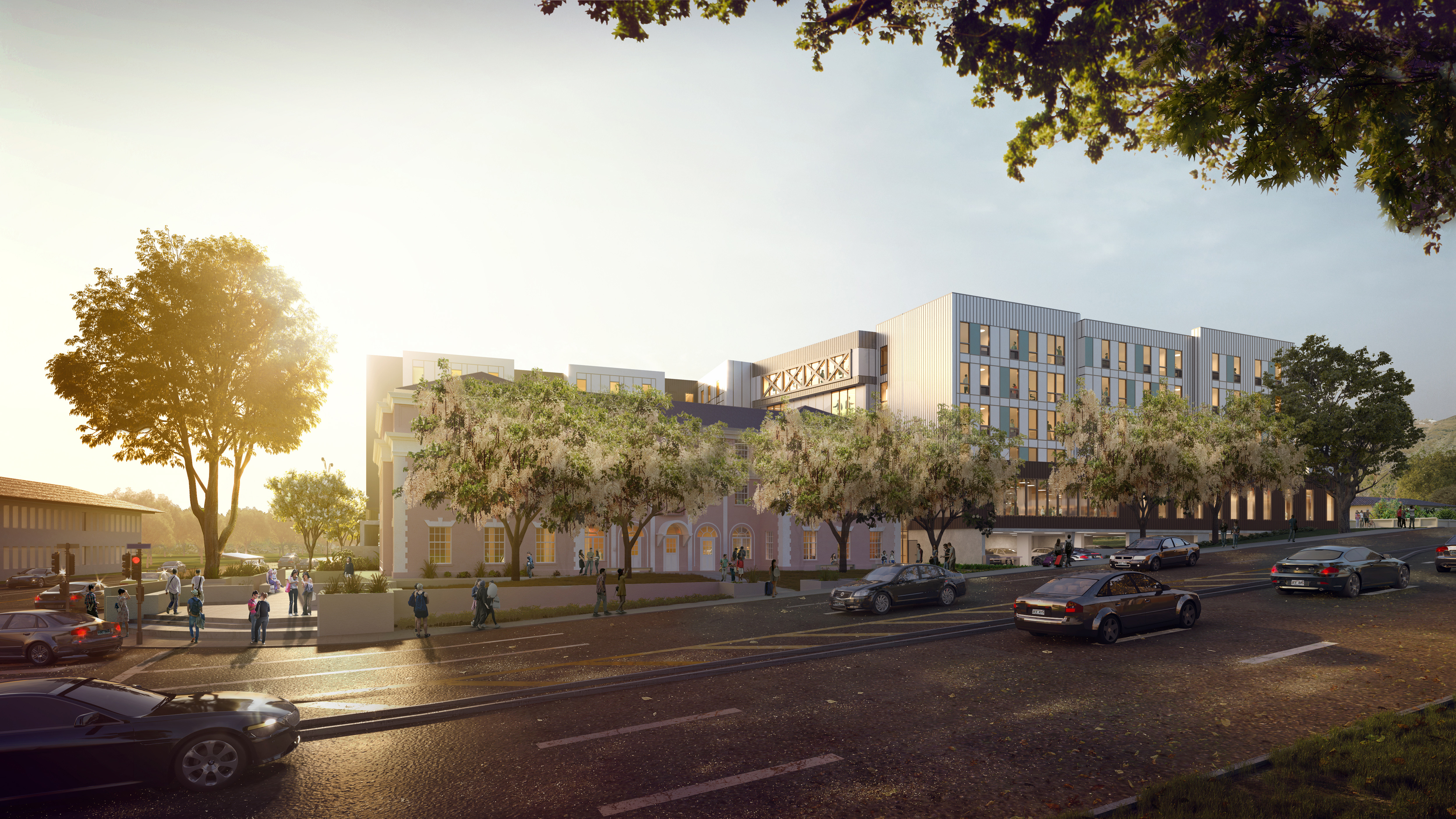 The main entry of the RISE project at the corner of University Avenue and Metcalf Street, seen in this rendering, will be named for Hawaiian Electric Industries. 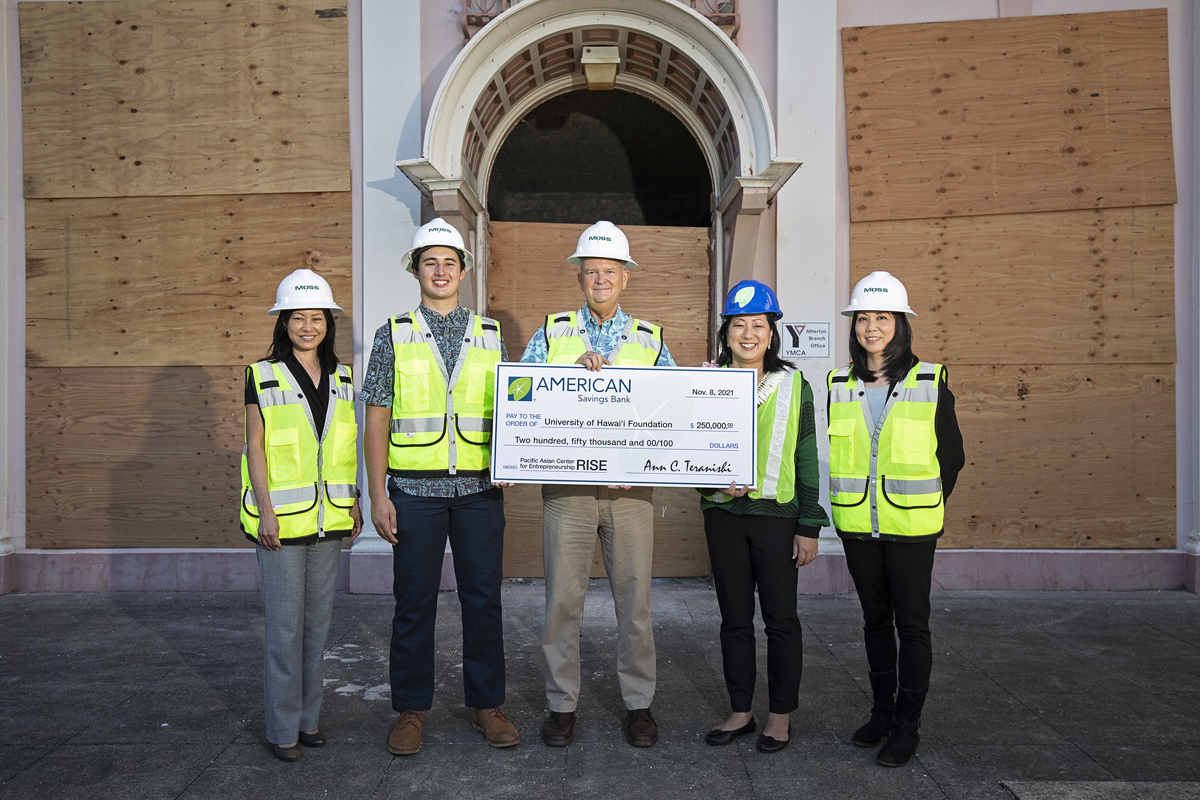 A rooftop deck, located on the Metcalf Street side of the building, will be named for American Savings Bank.

The Pacific Asian Center for Entrepreneurship (PACE) is the home for an integrated set of leading-edge entrepreneurship programs at the University of Hawai‘i. Based in the Shidler College of Business, PACE is dedicated to fostering the entrepreneurial spirit among all members of the university and local community. For more information, visit pace.shidler.hawaii.edu or follow on Instagram @PACEhawaii. For more information on RISE, please visit pace.shidler.hawaii.edu/rise

The Shidler College of Business at the University of Hawai‘i at Mānoa was established in 1949 as the College of Business Administration and named in 2006 after alumnus Jay H. Shidler, founder and managing partner of The Shidler Group. The Shidler College of Business is renowned for its expertise in international management education and is consistently ranked among the nation's top business schools for international business by U.S. News & World Report. Long recognized for its Asia Pacific focus, the college offers a wide variety of degree, certificate and executive programs. The college offers the only graduate program in the state of Hawai‘i and Vietnam accredited by Association to Advance Collegiate Schools of Business International. www.shidler.hawaii.edu

The University of Hawai‘i at Mānoa serves approximately 20,000 students pursuing more than 225 different degrees. Coming from every Hawaiian island, every state in the nation, and more than 100 countries, UH Mānoa students thrive in an enriching environment for the global exchange of ideas. For more information, visit manoa.hawaii.edu. Follow us on Facebook www.facebook.com/uhmanoa and Twitter www.twitter.com/UHManoaNews