The Ann Dunham Soetoro Endowment is a tribute to an independent thinker who used Applied Anthropology to analyze situations and prevailing assumptions to develop creative and effective solutions. It is a living legacy to a compassionate human being who lived and worked among the people she was studying, seeking to understand their culture and values in a way that allowed her to bring about lasting change.

Through scholarships supporting graduate study in social science and Southeast Asian Studies, the Ann Dunham Soetoro Endowment supports action-oriented research and cooperative study that seek to influence the next generation of committed scholars working in Asia and the Pacific.

"Ann made a difference for the whole village, keeping her eye out for women and providing microcredit for women. She made sure that women were embedded in the larger economy of the village."

A Legacy of Learning

Ann Dunham Soetoro's dedication to education for herself and her children, and to providing educational tools to communities in Indonesia, reflect her belief that knowledge builds the foundation by which people can help themselves and others.

Her commitment to partnering with others to create sustainable change is evident throughout her life's work and studies. While at the Ford Foundation in Indonesia, Ann worked with non-governmental organizations to support programs addressing women and poverty; later she established extensive microcredit programs throughout Indonesia and Pakistan. Ann personally sponsored dozens of students in Indonesia so they could work with her to learn about microcredit, research and crafts.

"My mother had a commitment to curiosity. She was always engaged, and had a love for the world and for her children. This endowment supports her interest in diversity and the inclusive representation of individuals who have been marginalized by society: the poor, women and children."

The endowment will honor Ann Dunham Soetoro and the work this fund will perpetuate. It is a natural extension of her studies at UH Mānoa as an East-West Center scholarship student, as well as her life as a researcher, faculty member and grant maker.

The Ann Dunham Soetoro Endowment is a collaborative effort between UH Mānoa and the East-West Center. As partners these two institutions together represent the highest concentration of Asia-Pacific specialists in the United States, making this the optimal location for the Endowment.

Scholarships are granted in cooperation with the East-West Center to students who represent Ann's values and interests in nurturing understanding, engaging in community service, and promoting empathy to encourage global cooperation. Supported by endowment funds, these scholarships will be awarded to students for generations to come.

Scholarships are awarded to students focusing on:

Through the recipients and their work, Ann's values and appreciation of an intercultural and international education will be perpetuated, and help us better understand and heal our world.

Livia Iskander, a recipient of the Ann Dunham Soetoro scholarship, reports that she has completed her field work on women's health issues in Indonesia, interviewing 240 women as well as 20 heads of primary health centers. Her work was recently profiled in a prominent Indonesian women's magazine. 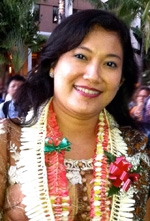 Livia, who says she very much appreciates the assistance she received from the Ann Dunham Soetoro Scholarship and her colleagues at the East-West Center, writes, "Thank you all again for the opportunity to be an EWC Fellow and for the scholarship I received from the Ann Dunham Soetoro Fund. I have thrived because of it and I hope to wrap up my studies by next semester."

"It humbles me to receive this award in honor of Ann Dunham Soetoro, whose legacy of research and work inspires me. I will use the award to help fund a community-based multi-media research project that will share the experiences of local people engaged in a climate change mitigation project in Kalimantan, Indonesia."

Wendy Miles, a recipient of the Ann Dunham Soetoro scholarship