With 44 seconds to play and the score tied, Colt Brennan connected with Ryan Grice-Mullins from five yards out to put the University of Hawai‘i Rainbow Warriors ahead, 35-28, giving Mānoa its perfect regular season record: 12 wins against no losses.

It was a thrilling comeback from a 21-0 deficit to the Washington Huskies, and it was the last time Colt ran off the field at Aloha Stadium. But it would not be the end of his influence on Warrior football players.

“Colt gave the state of Hawai‘i some of its most unforgettable memories of excellence and leadership,” says head coach—and Warrior alum—Timmy Chang. “Now, the Colt Brennan Legacy Fund empowers tomorrow’s football players to build on the UH legacy, creating their own impacts—on the gridiron, in the classroom, and for the community.” 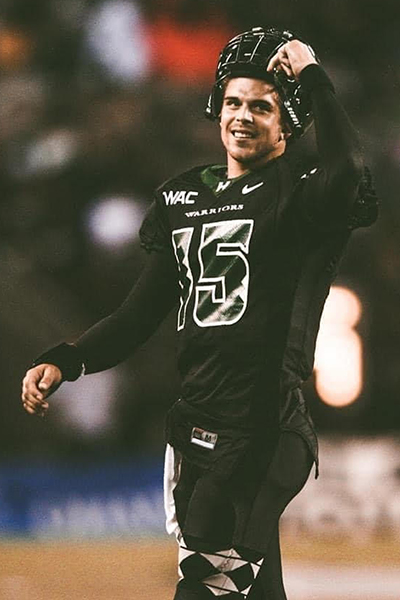 The new fund was established by Colt’s parents, Terry and Betsy Brennan, and by his sisters, Chanel Brewster and Carrera Shea. It will provide financial support into the distant future for UH Mānoa football players’ safety and success.

Carrera says Colt, who died in 2021 at age 37, would have wanted to give back to the program in any way he could. “He was interested in contributing even when his career at UH was over,” she says. “We think it’s special to support the program in his name, to carry on his memory, so years down the line, people will recognize what he did and who he was.”

“What Colt loved most about playing in Hawai‘i was the people,” says Terry, Colt’s father. “He liked that they came from all over, with different backgrounds and personalities. They really welcomed him, and he returned their heartfelt affection.”

“He talked about how life in the islands wasn’t about material things—just family and being together for barbecues and holidays,” says Colt’s sister Chanel. “He loved learning about the culture and island values from his new adopted family.”

Colt’s Legacy fund will generate recurring support for generations of UH football players, but for increased impact, it needs partnership with the Rainbow Warrior ‘ohana, still a special extension of the Brennan family.

Terry says, “We’re excited about this program Timmy Chang is building, and we hope this fund provides opportunities to help it grow.”

“We met so many great people, and we have so many great friends today from Colt’s playing days,” says Betsy, Colt’s mother. “It was so fun. They embraced us, and we embraced them, and we still talk to them today. This football team will always be part of our lives, and if we can help in any way, we want to.”