More than 100 former colleagues and students from around the world gathered virtually to surprise ethnomusicology leader Ricardo Trimillos, professor emeritus in the University of Hawaiʻi at Mānoa Department of Music and former Department of Asian Studies chair, on the occasion of his 80th birthday. One of Trimillos’ legacies was starting the Ric Trimillos Visiting Distinguished Professorship in Ethnomusicology in 2017 with the UH Foundation.

The milestone birthday party also raised funds to bring a foreign scholar of ethnomusicology to campus for a semester. UH Mānoa Department of Anthropology Professor Christine Yano is one of Trimillos’s former students. Yano is spearheading the “80 for 80” with a goal of raising $80,000 within a year from Trimillos’s 80th birthday.

“Ethnomusicology is about diversity and the richness of individual cultures,” Trimillos said. “Because UH Mānoa is on an island, our students do not readily have opportunities to meet other leading scholars in the field or to bond with student peers from other programs. The fund was created expressly to bring non-American ethnomusicologists to UH, so that our students come into contact with different and current approaches and perspectives in the field.”

“Ric has been the public face of ethnomusicology at UH, especially since the retirement of Barbara Smith. Although he retired a few years ago, he remains at the forefront of what ethnomusicology means in Hawaiʻi and at UH,” Yano said. “Each contribution is a vote of love and support for someone who has spent his career giving so generously of himself to students and extended community.”

After overcoming the initial shock of the surprise, Trimillos said he was delighted that the planning committee was able to bring attendees from the different facets of his life, including “my family, my German host family from 1961, the university, the East-West Center, cultural organizations, professional organizations, the local Filipino, Japanese and Hawaiian communities, the local arts community and former students now pursuing successful (mostly academic) careers in the U.S., Asia and Europe.”

Trimillos’ research focused on Asian performance, Hawaiian music and dance, and the music of Muslim groups in the Southern Philippines. His publications in three languages include pieces on Asian Americans, world music in higher education, cross-cultural implications for the arts, interrelationships of the arts, Philippine ritual and Hawaiian music. Trimillos is also an active performer of the Japanese koto.

Trimillos earned a PhD at the University of California, Los Angeles; an MA in ethnomusicology from UH Mānoa, sponsored by the East-West Center; and an undergraduate degree in music and English literature from San Jose State University. He also completed advanced study at the Ateneo de Manila in the Philippines and University of Cologne in Germany.

This work is an example of UH Mānoa’s goal of Enhancing Student Success (PDF) and Excellence in Research: Advancing the Research and Creative Work Enterprise (PDF), two of four goals identified in the 2015–25 Strategic Plan (PDF), updated in December 2020. 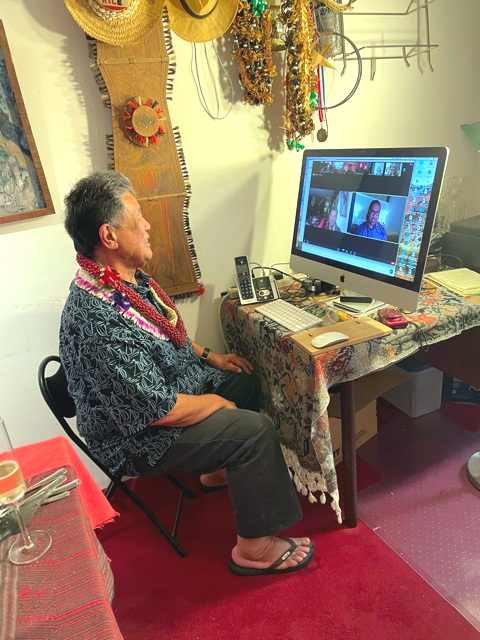