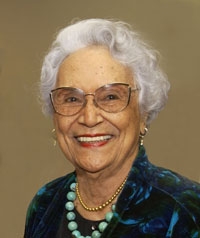 One of the great citizens of Hawaiʻi was revered Hawaiian kūpuna, Gladys Kamakakūokalani ʻAinoa Brandt. Her life was shaped by the history taking place around her – from the funeral of Hawaiʻi's last reigning monarch Queen Liliʻuokalani to the movements for self-determination in the 1960s and 1970s, and the Hawaiian Renaissance we feel today.

Denied her culture and her language as a child, she grew to embrace her Hawaiian roots and became a legendary fighter for Native Hawaiian rights. Brandt became Hawaiʻi's first woman public school principal in 1943 and, in 1962, the first woman to be named district superintendent of schools. Later she became the first Native Hawaiian principal of the Kamehameha School for Girls, and was promoted to director of the high school division. Through her role as educator, she helped revive Hawaiian traditions and helped countless Hawaiians to further their education.

After a 44-year career in education, Brandt retired, but remained engaged in her community. From 1983 to 1989, she served on the UH Board of Regents. Brandt helped shepherd the creation of the UH Mānoa Center for Hawaiian Studies and in her honor, the center and the program were later renamed “Kamakakūokalani – Gladys K. ʻAinoa Brandt Center for Hawaiian Studies.” Brandt also served as a UH Foundation trustee and was a lifetime President's Club member.

The goal of this fund is to maximize the center's interchanges with visiting scholars. Funds are also used to support visiting experts, e.g. Native academics, artists and cultural practitioners who teach courses and seminars at the Kamakakūokalani Summer Institute at the Center for Hawaiian Studies.

The Center for Hawaiian Studies is among the world's leading institutions of Indigenous knowledge. It facilitates research and dialogue crucial to understanding many issues that face Hawaiʻi and how these issues can be resolved through the use of principles and practices gleaned from Hawaiian culture.

The establishment of the endowed chair greatly enhances research at the Center, attracts students and scholars from throughout Polynesia, encourages positive dialogue between academic disciplines, as well as between the university and the wider community.