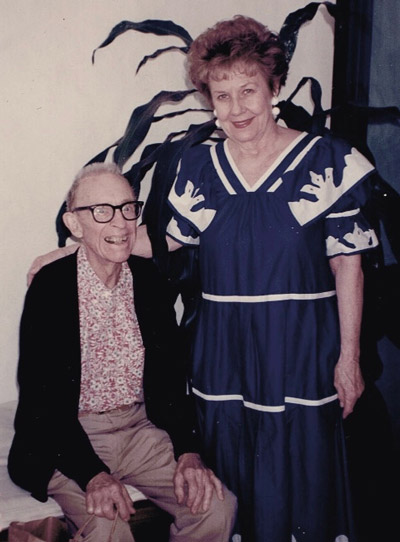 ARCS Foundation Honolulu Chapter established the George Orton Elmore and Mona Marie Elmore Scholarship endowment through the bequest from Mona Elmore, a long-time member and strong supporter of the organization’s mission of advancing science in America.

The ARCS Foundation has been supporting UH students since the 1970s.

Raised in Pasadena, Calif., and trained in the hands-on approach of the Dewey educational pedagogy, Mona worked as a teacher and school superintendent before her marriage to George. The couple met in Laguna Beach, where the New England–born Yale graduate was a real estate developer. “He liked what he saw,” Mona said of George with a twinkle in her eye. The couple moved to Hawai‘i, settling on O‘ahu after Hurricane ‘Iwa spared their Kaua‘i home but devastated much of the Garden Isle.

They were strong ARCS Foundation supporters for many years. Mona regularly and generously hosted a tableful of friends (who were in turn expected to patronize the silent auction) at fundraising events. ARCS Honolulu Chapter President Sui-Lan Ellsworth recalls Mona, perfectly coiffed and stylishly dressed but with a devilish grin, snatching popular holiday grab bag gifts and holding them ransom to increase funds raised for scholar awards.

“Now her generous gift will allow us to assist more students, particularly in areas such as oceanography and astronomy, where she had keen interest,” said Sui-Lan. Award preference will also be given to nursing, the field of her close friends and fellow ARCS members Lois Magnussen and Sue Thacker, whose families attended UH football games and spent holidays together. “We had seats on the 50-yard line. She was a great–and vocal–football fan,” recalled Lois.

“What I remember is the astute questions she put to ARCS Scholars,” added Cheryl Ernst, chapter co-president. “She was always curious about their work.” For years Mona funded the chapter’s annual Scholar of the Year Award for the best presentation among the year’s scholar award recipients and Scientist of the Year Award for a UH faculty member who demonstrates sustained excellence in research and mentorship.

Mona was honored along with her late husband as Golden Hearts at the Honolulu Chapter’s 2013 Hearts of Gold Fundraiser for their vision and generosity. She died in December 2018 at the age of 94. “She is greatly missed, but we are happy that her memory lives on through this legacy,” said Lois.

University of Hawai‘i Vice President of Advancement and UH Foundation CEO Tim Dolan said, “The ARCS Foundation’s generous support of UH students has made a tremendous impact in the lives of so many of our outstanding students. We are most grateful to all members of this dynamic group of philanthropists who are empowering our ambitious future STEM leaders to fulfil their potential.”

The non-profit ARCS Foundation Inc. comprises 15 chapters across the nation working to keep the United States competitive in STEM fields. Since its founding in 1974, the totally volunteer Honolulu Chapter has provided more than $2.3 million in unrestricted grants to 548 University of Hawai‘i graduate students, annually supporting about a dozen $5,000 awards to students in the university’s Colleges of Natural Sciences, Engineering and Tropical Agriculture; Schools of Medicine, Nursing and Ocean and Earth Sciences and Technology; and Institute of Astronomy. More at https://honolulu.arcsfoundation.org