Stefan Seyb has the enviable gift of finding a career by following his luck and doing what he loves.  His experience as a grad student at SOEST was the beginning of a life of exploration and travel, and his gratitude for the help and opportunities given to him at UH inspired a recent gift to SOEST.

Stefan had never been to Hawai‘i and knew very little about the specialty of his future graduate work when he came to UH Mānoa to study geodesy. He had not taken a geodesy course but managed to get into the program because he aced the math equations on the entrance exam.

“I had recently taken finals for my last semester of electrical engineering for my BA,” he says. “The equations for seismometers are remarkably similar to the equations we studied, and when I took the test it was all fresh in my head. Three months later I might not have remembered how to do them.”

Once at UH, Stefan completed geology courses he needed before graduate studies. He says, “I was awarded a graduate student scholarship (under an Office of Naval Research grant) of $450 a month and my rent was only $100. I could live comfortably as a student in Mānoa. I loved Hawai‘i immediately.”

As a kid he tinkered with radios, which led to undergraduate studies in electrical engineering. At Oregon State University, he took geology courses and was instantly hooked. He loved exploring, hiking and camping in the Cascade Range. It was an exciting time: the theory of plate tectonics was new, radical, and fascinating, and it was about to disrupt the old theoretical basis of geology. His advisors counseled him to finish his engineering degree, and then pursue graduate studies in geophysics. Likely because he did not have an undergraduate degree in geology, UH was the only school who accepted him.

Stefan remembers, “While at SOEST, I studied with George Woollard, the Grand Old Man of geophysics, a gravity specialist and the director of HIG. I went out on a ship for four months at a time, mapping the gravity fields of the Pacific. I loved the ocean and being at sea. I would pack all my personal belongings into my office and save on rent, and my stipend doubled while I was at sea. I was saving money!”

The mapping of gravity fields led to discoveries invaluable in proving the theory of plate tectonics. “This life put me in research mode. The professors put a lot of responsibility on us grad students who were at sea collecting measurements, while they needed to stay at UH and teach. I was at sea in Chile when we documented some early seismic evidence of plate subduction on the Peru-Chile trench.”

Once he completed his master’s, wanderlust struck, and he spent two years traveling around the world, starting with the remote Pacific, Solomon Islands, and Papua New Guinea, where he collected flowers with a botanist friend from UH. 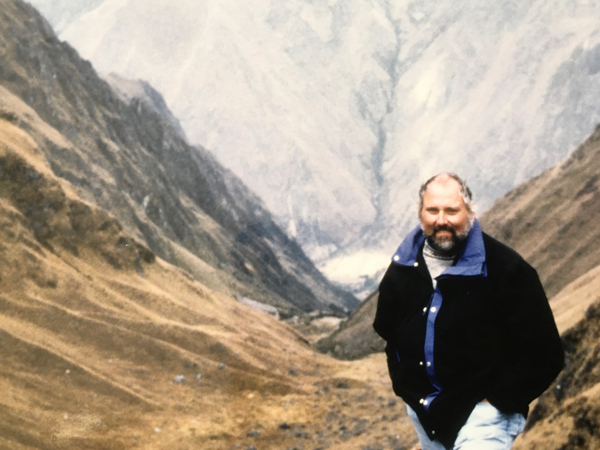 He returned to Mānoa and considered a PhD. Instead, he sought a job in the oil industry, which was “hiring like crazy” because of the OPEC embargo, and this became his career.  “Because of my interests, I knew I wanted to be in acquisition—out in the field, looking for oil reserves, because I wanted to see the world. I went from the jungles of Peru to the Sahara desert, from the North Sea to West Africa, wherever there was oil,” says Stefan.

He says, “I still love to hike, bicycle and travel the world.” In addition to enjoying retirement, he supports UH students in their journey. “I am forever grateful to SOEST and UH for my career. I definitely want to keep in touch and keep contributing to help students.”

Stefan has committed a portion of his estate to the needs of the School of Ocean and Earth Science and Technology including student support. Future students in SOEST will perhaps travel the planet or conduct research changing our understanding of it, as he did.

“I don’t think I can give students the kind of relative income I had as a grad student in the Seventies. Grad students coming to study here have little support and no local connections to help out. I’m not picky about the type of study or the student receiving the funds. I just want to help because I am ever so grateful for the scholarship I received.”