Mike Branley in his Pearl City High School classroom, May 1982.

“We were introduced by mutual friends, and began meeting in tea rooms in Seoul,” says Michael Branley. “Chong Ja was very intelligent and well educated. We had long conversations about all kinds of topics. When my tour neared its end, we agreed to stay in contact and see where things would lead.”

Branley was in Korea assigned to Eighth Army Headquarters in Seoul, a graduate of the Military College of Vermont, Norwich University. When he returned to the United States upon being discharged from the Army, he taught for a year in Massachusetts before fulfilling his lifelong desire to live in Hawai‘i. He enrolled as a graduate student at the University of Hawai‘i at Mānoa.

He and Chong Ja occasionally spoke on the phone, and wrote letters for two years before she secured a visa to the U.S. They were married soon after.

Branley earned a master’s degree in Library and Information Science; he spent 30 years teaching social studies and working as a librarian in Hawai‘i’s schools. “I worked with many wonderful teachers, students, and staff,” he says. “Many of them remain friends to this day.”

Chong Ja Kim Branley died from breast cancer at age 36, a year after her diagnosis.

Anyone who has ever lost someone they love to this disease knows the toll it takes on survivors. You never forget the one you love, and they always remain with you.

When he learned about the UH Cancer Center, he knew this work was especially important. “There has been too little research in this area,” he says. “My wife and many of my former colleagues and friends of Asian and Pacific Islander ethnicity have died. I am not able to contribute a lot, but I try to do what I can.” 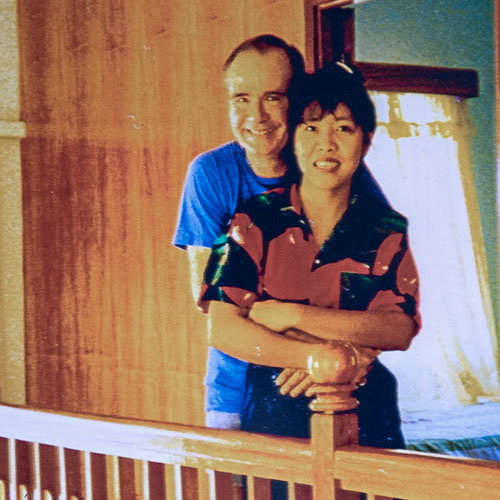 A special place with special people

Branley is remarried and lives in Arizona. “My wife Babette and I regret leaving Hawai‘i,” he says. “It’s a very special place, with special people. One never fully comprehends this until they leave. I lived there for 43 years and still consider it my home; I loved it when I first arrived and my feelings have never changed.”