When I retired from federal civil service in 2003, I wanted to do something for the community in general, something I could enjoy while still being of service.

I love plants and growing things. In 2004, I completed the O‘ahu Master Gardener 19-week training, a nationwide program. Under the auspices of UH’s College of Tropical Agriculture and Human Resources, volunteers are trained to answer questions from home gardeners.

I was very active, participating in the “Got a Plant Question?” Master Gardener booth at Kapi‘olani Community College from 2004 to 2019. Another Master Gardener, Phyllis Lee, was benefit chair for Lyon in Summer 2009, the first Lyon Arboretum fundraiser. She asked me to help as chairperson of the committee for volunteers.

It was a most successful fundraiser, with a silent auction and music by local musicians, with Chef Chai Chaowasaree catering the dinner. I was involved in Lyon fundraisers in 2010, 2011 and 2013.

I was on the Board of Directors from 2010 to 2012 for the Lyon Arboretum Association, as it was called then. It’s now the Friends of Lyon Arboretum. I got to see some of the inner operations of Lyon, and got to know the staff, many of whom I still greet when I see them there.

I took the Lyon docent class in 2006 and led tours until about three years ago. The training was led by Ray Baker and Jill Laughlin. Over many years, Ray obtained and planted many of the plants now growing at the arboretum. His passing some years ago was a huge loss for Lyon.

Jill is now retired and living on the mainland. Ray and Jill shared their love for Lyon Arboretum with so many of us. They inspired me to remember Lyon in my legacy, so that our community may continue to enjoy nature’s beauty and abundance.

Continually awed by a peaceful feeling

If you have ever been to Lyon Arboretum, you cannot help but be amazed, being so close to nature in such a verdant rain forest. As many times as I have given tours there or simply walked the grounds, sometimes on small trails off the beaten path, I am continually awed by the peaceful feeling I gain just being there.

There are so many great features in the arboretum: the uphill climb to the walking Buddha, Inspiration Hill, the long walk to Aihualama Falls, and Fern Valley. But I like best the view when coming down to the Great Lawn from the higher trails. I love to tell people about the two “islands”: one on the left, showcasing plants brought to Hawai‘i by South Pacific voyagers, and one on the right, showing native Hawaiian plants, both indigenous and endemic.

The plants I like best at the arboretum are no longer growing near the main trails: A rattan vine, coiling its wickedly barbed stems up and up into nearby trees, and a small stand of papaya trees that displayed the distinct difference between male and female trees and flowers. Both the rattan and the papayas made great talking points. Plants are so interesting!

This gem of greenery and peace a scant 20 minutes from Waikīkī needs to be maintained in perpetuity, forever for everyone. This is why I donate to Lyon Arboretum. 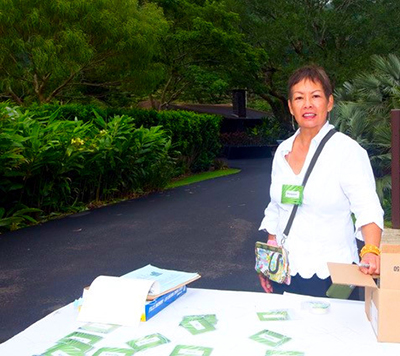 Chairman of the Volunteer Committee, Margaret V. Mortz at Lyon in Summer in 2009, the first Lyon Arboretum fundraiser. 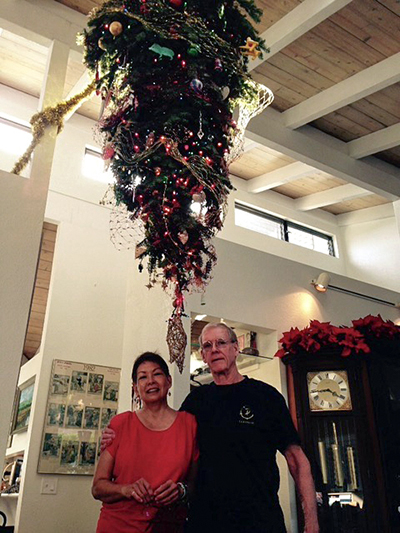 David and I have hung our tree from our ceiling every year since our house was built 30 years ago. We like it this way. It takes us two ladders and four hands to put it up.