Members of the Silicon Valley and San Francisco chapters of the American Council of the Blind field tested the UniD app at Muir Woods National Monument in April 2018. Photo courtesy of: Alison Taggart-Barone/NPS.

A tall, white-brick lighthouse rises above a grassy field speckled with wildflowers in bright yellows, golds, pinks, and purples.  The sky is covered in thick, fluffy clouds. It’s a beautiful morning at Cape Cod National Seashore, or it was when this photograph was taken. The image appears in a National Park Service brochure. The description is in print but is also now available as an audio recording through a free research-based smartphone app, for people who are blind or visually impaired.

“It’s very important for people to know that it can be very lonely, being alone and not being able to see,” a blind visitor noted, as he listened through earbuds.  “All of a sudden, though, through these descriptions, we can see.”

Mission: Accessibility for all

The app is one of the public components of The UniDescription Project (UniD), which provides detailed audio descriptions of U.S. national park brochures. UniD is a collaboration among the University of Hawai‘i at Mānoa’s School of Communications, its Center on Disability Studies, the U.S. National Park Service (NPS), the American Council of the Blind (ACB), and other stakeholder organizations, including support from Google.  Dr. Brett Oppegaard, an Associate Professor at UH Mānoa, is UniD’s principal investigator.

To date, the project team has completed 55 park brochure descriptions, including at some of the most iconic locations in the country, such as Yellowstone National Park, the Washington Monument, and the Statue of Liberty, plus two in Hawai‘i (Hawai‘I Volcanoes National Park and Pu‘ukohola Heiau). Recent grants from Google will fund 30 more, bringing Google’s total contribution to UH and ACB to $225,000, plus in-kind services. The National Park Service has contributed two grants as well, for $345,000, plus thousands of hours of in-kind staff services and support, bringing total support of this project to more than $500,000 and more than 10,000 contributed hours.

They all are addressing a big concern in modern society. More than 20 million Americans have a visual disability, according to the American Foundation for the Blind, and converting purely visual media – such as photos, illustrations, and maps – to audio media is a challenge, but the UniD team has developed a process, sets of best practices, and digital tools to help, which it freely shares via the UniD website, www.unidescription.org.

“I want to know everything!”

Feedback so far has been overwhelmingly positive. NPS park staff at participating sites praise the project and express interest in expanding media accessibility beyond brochures, such as through wayside tours and other types of descriptions and interpretation.

Volunteers who have tested the mobile app are “thrilled with the project to date,” Oppegaard said, “and repeatedly ask when more audio descriptions will be available.”

“Through (this app),” one participant said during a recent field test, “I feel like my park is really making an effort to reach out to me." 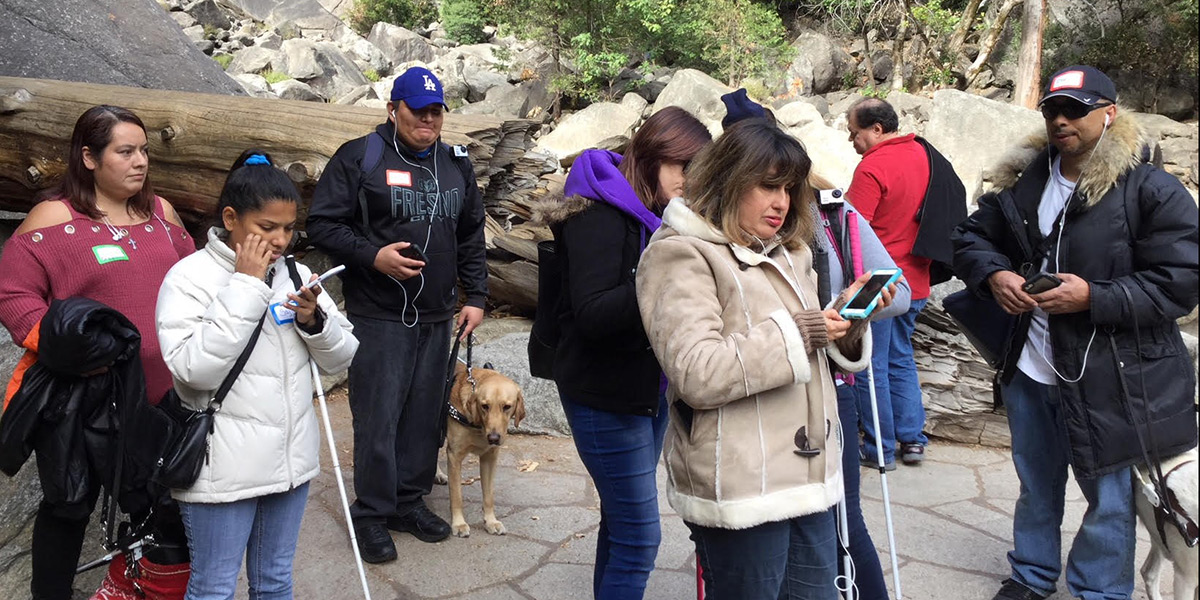 This photo (provided by CCB's Jamie Gibson-Barrows) shows: Veronica Hernandez, Joey Ruiz, Nikki Richards, and Chenier Derrick in the back row, from left to right, and Sajja Koirala (our UH research assistant) and Martha Espitia in the front row.