Hawaii Pacific Foundation has invested nearly $1 million into University of Hawaiʻi programs that benefit Native Hawaiian students and their communities by helping to empower them and those around them.

The Native Hawaiian Organization believes in thinking differently about the social, economic and cultural issues faced by the Native Hawaiian community, seeking to engage in upstream solutions that treat the source of problems, rather than programs that address only the symptoms.

“What we're doing is we're taking the helpers and the people who need help and we’re a bridge between them, finding ways to allow them to communicate better,” says retired Brig. Gen. Edwin A. “Skip” Vincent, an alumnus of the UH Mānoa Shidler College of Business and the group’s chairman, who founded the Hawaii Pacific Foundation after retiring from a long career in the Hawaiʻi Air National Guard as a way to give back to the Native Hawaiian community. And the help provided to Native Hawaiian communities ends up funneling into the mainstream communities around them, he says.

As a Native Hawaiian Organization, the Hawaii Pacific Foundation’s mission is to empower Native Hawaiian communities through programs that create opportunities for success.

It focuses on education, primarily in science, technology, engineering, arts and mathematics — STEAM.

The Hawaii Pacific Foundation holds a majority ownership in five Native Hawaiian-owned small businesses that engage in federal contracting. The foundation reinvests its profits from the businesses in supporting the economic, social and cultural issues within the Native Hawaiian community. 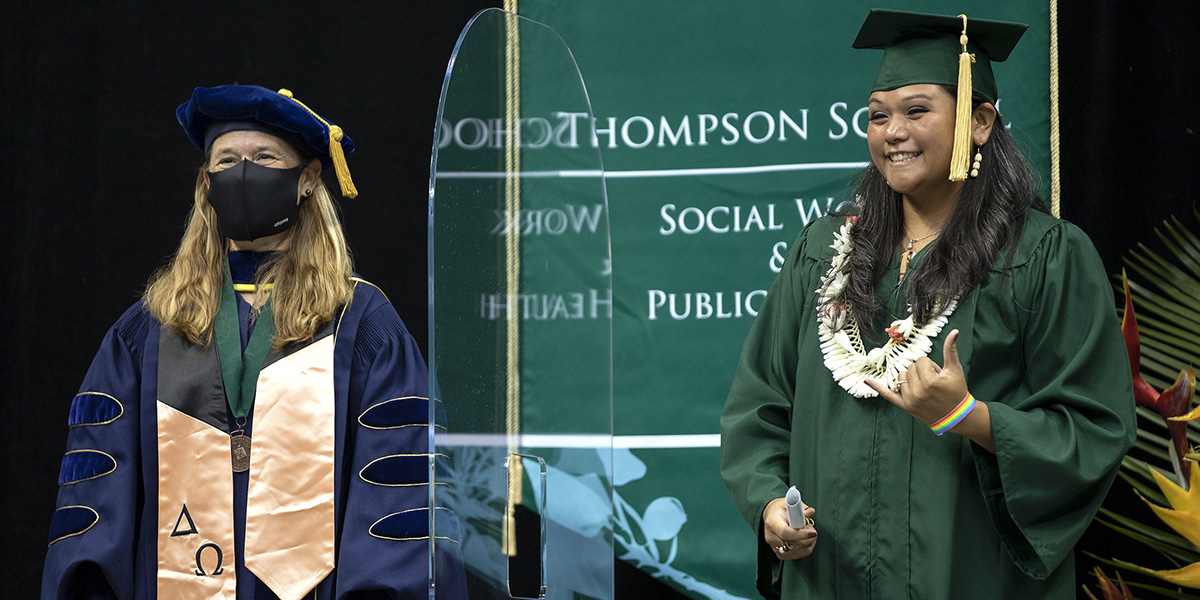 “It’s a symbiotic relationship,” says Vincent. “Our NHO gives them the attributes and the purpose, and the companies provide us the resources.”

The foundation made its first gift to UH at the end of 2017, $3,000 to purchase bus passes for high school students enrolled in a program at UH West Oahu.

Since then, it has increased its giving exponentially each year, with gifts to the Thompson School of Social Work & Public Health, Hawaiʻinuiākea School of Hawaiian Knowledge, the College of Engineering at UH Mānoa, UH West Oʻahu and the UH System.

At the Thompson School of Social Work, Hawaii Pacific Foundation funded five programs, including scholarships and funds that support the hiring of graduate students to work with the Native Hawaiian community and conduct research on the issues that impact Native Hawaiians.

“What we saw in the School of Social work was amazing resources,” says Vincent, and Dean Noreen Mokuau’s vision aligned with what they were trying to do. “That was the start because we didn't realize the University of Hawaiʻi had so much resource, all we had to do was find a way to mobilize it to outreach.”

It’s important to the foundation and its board not to “just give money to programs and be looked at as a bank account, because we want our money to turn into fruitful efforts,” says Jory L. Scoville, the foundation’s president and chief financial officer, who is also an alumna of the Shidler College of Business.

“The university is moving in the direction of giving the students the type of education and the tools that they need to become successful back within their own communities,” Scoville says.

It’s important that the students see they don’t have to leave their own communities to be successful, Scoville says.