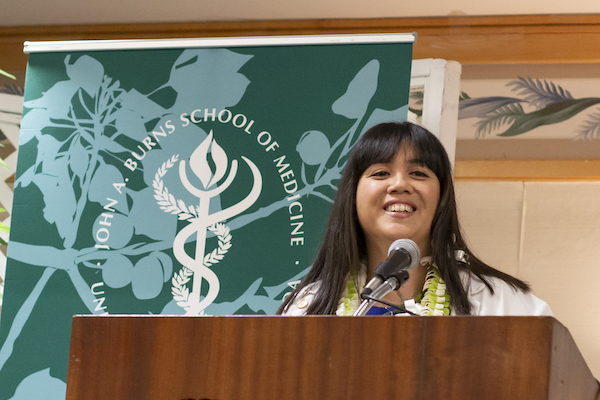 Ambition was never a problem for Britney (Kanoe) Quibelan. She had big goals as a child, dreaming of being an FBI agent and then a psychologist. She settled on becoming a doctor when she realized the field could offer a blend of her interests in piecing together mysteries and talking with and helping people.

But, in a speech to donors attending the medical school’s first stand-alone Scholarship Dinner in January 2019, she frankly said that when she learned she was going to have a baby while she was still in college, she thought her life was over, because she had to quit school to care for the child.

“I was on welfare, unable to continue school,” she explained, as a single mother supporting herself and her daughter. Still, she longed to get back to school. “Education is so important, and it really opens doors,” Quibelan said. “Through the grace and favor of God, my family and everyone who has supported me,” she said, she returned to the University of Hawaiʻi at Mānoa and graduated with double majors in Biology & Women’s Studies.

“Along the way there have been so many people who have really put their time into me and their treasures and efforts,” said medical student Britney (Kanoe) Quibelan.

“I actually got onto the medical school path through a program called the Native Hawaiian Student Pathway to Medicine run by the Native Hawaiian Center of Excellence at UH John A. Burns School of Medicine (JABSOM). They really helped me get together what I needed to know what about the MCAT (Medical College Admission Test) — how to be an applicant, and so many things. That was my first slide into the door,” she explained.

She worked for the Hawaii State Department of Health and entered the ʻImi Hoʻōla Post-Baccalaureate Program, a one-year intensive study program for promising MD candidates. If they complete the challenging program, they gain admission into the next MD class.

Paying for medical school is a challenge in itself for Quibelan and her classmates. Because of people like the donors to JABSOM gathered in the room listening to Quibelan, that challenge becomes less overwhelming.

“For me and for all of us here tonight, the scholarships mean more than we could ever say. For me in the most obvious way, it decreases our loan burden while we are in medical school and for some of us that means we may be able to choose lower-paying specialties, or the thought that maybe ‘I have to do this to pay off my loans,’ maybe that is less considered because we have these scholarships,” she said.

Quibelan has a simple, lovely description for those who have helped her: “People I call my family, not by blood, but because they care for me.”

“It is written that a wise man leaves an inheritance for his children’s children,” said Quibelan, now a 4th year medical student. “Those who have given to me, their time, their talents, their treasures; they have sewn into my life as a person but also as a future doctor. So I can focus on becoming that family physician that in my heart I know I was created to be. And with my complicated pathway, it’s also given me a heart to serve people in similar situations. I have a heart for Native Hawaiians. I have a heart for single mothers. I have a heart for basically, you will qualify in that category if you are from or have any ties to Hawaiʻi.

Thank you for giving of your treasures, for sewing into the next generation of doctors not only for you but for your children’s children.”

Britney is particularly grateful to assistance she received from: