Fran Friend Alexander and Kirk Alexander are seen on the beach in Rangiroa in Tahiti in 2018.

One woman’s love for the Pacific Ocean will one day mean opportunities for women studying oceanography at the University of Hawaiʻi Mānoa.

Fran Friend Alexander’s love for the ocean has taken her all over the Pacific, including Hawaiʻi, where she and her husband vacationed for the past 20 years.

It’s a connection that runs so deep that she and her husband have endowed a scholarship for women students pursuing graduate degrees in oceanography at the School of Ocean and Earth Science and Technology.

The FranZina Friend Alexander and Kirk Alexander Love the Pacific Ocean Scholarship is for graduate students who are active members of Women in SOEST, are passionate about the Pacific Ocean, and want to study it and its inhabitants.

“We’re just really in love with the ocean but the Pacific is our heart, and I want to save it because it’s in trouble,” she says. “I want all future generations to be able to experience healthy ocean aquaspheres where fish and coral reefs thrive."

When she decided to establish a legacy, Fran chose the University of Hawaiʻi’s oceanography program after speaking with Dr. Margaret McManus, the oceanography department chair at SOEST.

“I want to encourage women into the sciences and into the ocean,” Fran says.

McManus says graduate students in oceanography typically receive financial aid through federal grants or contracts secured by their faculty advisors or from teaching assistantships. Of the 60 graduate students enrolled in the current school year, only 10 have teaching assistantships; the rest are dependent on their advisors’ grants. There are only a handful of scholarships.

“The limiting factor that we’re seeing in admitting students is the funding,” she says. “We often have many more qualified people than we can admit because we want them to be funded.”

A life on the ocean

Fran’s career didn’t take her to the ocean. She and her husband, Kirk Alexander, live on the other side of the Pacific, in Seattle, where she owned a computer software store in the 1980s before getting into the trade show business.

When she met her husband, he was an active sailor, racing as many as six nights per week. He is now retired from Boeing Commercial Airplanes, but recently returned to work on a short-term contract. For years they owned a 36-foot sailboat, sailing the Pacific Northwest and Northwest British Columbia, Canada.

Their annual trips to Hawaiʻi started after a friend from Houston moved to Honolulu. The couple would stop on Oʻahu to visit her friend, Jeannie, before heading to their timeshare on Kauaʻi, or Jeannie would come to Kauaʻi.

They are hoping to travel next to the Caribbean, then, next year to visit a number of islands in the South Pacific, snorkeling where the coral reefs are vibrant and alive. They plan to then spend six weeks touring Australia's coastal regions.

“The snorkeling there is unbelievable,” she says, adding that she hopes her gift will also support the study of how climate change affects the ocean.

It will — McManus says the oceanography faculty has a major research component that focuses on climate change.

Fran fears any damage to the reefs and the ocean will only be worse after she is gone.

“By then we’ll not only have passed the point of no return but everything is going to be different,” she says. “We’re going to need lots of scientists to cope with this and that’s a driving factor for my gift. Also, if we’re going to fix the world, we need women to do it.”

Meanwhile, Fran has been busy with another project related to the ocean — organizing, identifying and cataloging a large collection of seashells amassed over the years by herself, her mother and her in-laws. Once she’s done, she plans to give the collection to Dr. Doug Luther, a UH Mānoa oceanography professor, who will keep them safe in his collection.

“She’s just wonderful – I just feel so grateful that we met and that we are able to do something to help her vision and that so many students will benefit from her gift,” she says. “I just feel deep, deep gratitude for her.  And I know our students will, too.” 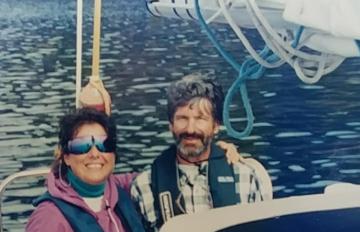 Fran and Kirk aboard their 36-foot sailboat off the coast of North British Columbia. 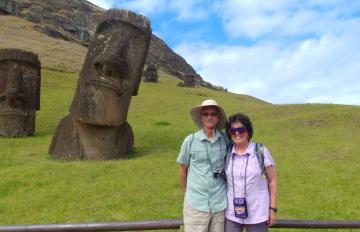 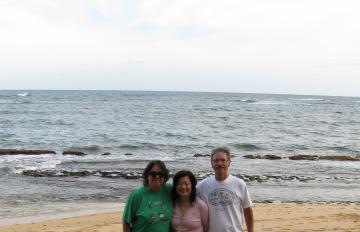 Fran and Kirk with their friend, Jeannie, at a beach on the North Shore of Kauai. 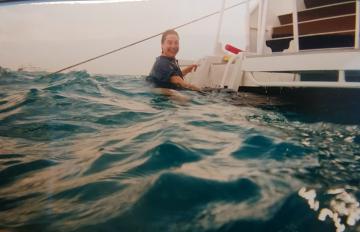 Fran after snorkeling the Great Barrier Reef in Australia. 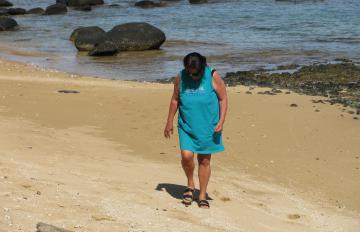 Fran searching for seashells on Tunnels Beach on the North Shore of Kauai. 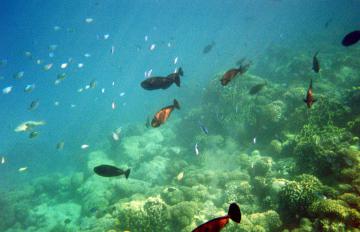 Fish swimming near the coral reef at Fakarava Atoll in French Polynesia, one of Fran's favorite places to snorkel.