Cast and crew of the popular University of Hawaiʻi at Mānoa production ʻAuʻa ʻIa: Holding On are preparing to take the Hawaiian language play to New York City. This is the first time a UH Mānoa Department of Theatre and Dance production has been selected to perform in the Big Apple. The invite is a major accolade.

“It definitely will put us on a national map as the entity as the university to come to, to study indigenous theater,” said UH Mānoa Hawaiian Theatre Program Associate Professor Hailiʻōpua Baker.

Taking the production to the East Coast comes with its challenges. The 32-member cast and crew have just a few weeks to raise $100,000 to cover airfare, cargo and accommodations.

The Hawaiʻi State Theater Council recognized the UH Mānoa Department of Theatre and Dance with 19 Poʻokela Awards for Excellence at the 2015 Stars Night Out.

Lāʻieikawai received 10 awards, the most for any production.

The new Hawaiian Theatre program, in the UH Mānoa Department of Theatre and Dance, enthralled a diverse audience on Feb. 20, 2015, with its inaugural production, “La‘ieikawai.” This stage adaptation of the traditional mo‘olelo of La‘ieikawai incorporated mele, hula and chant. The entire performance was in the Hawaiian language. Subtitles were not used, but a comprehensive audience guide was available to help with interpretation. 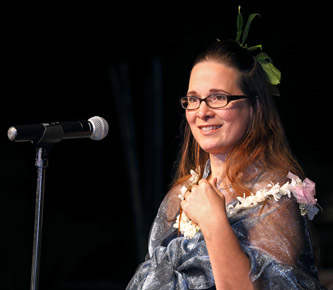 This production had been a long time coming for Tammy Haili‘ōpua Baker, overseer of the playwriting MFA and catalyst behind the program. After earning both her undergraduate and graduate degrees at UH Mānoa, Baker worked in the Kawaihuelani Center for Hawaiian Language for 15 years. “Theater was always my joy,” said Baker, so when the opportunity arose to start a theater program for Hawaiian language productions, she jumped at it.

A first for indigenous theatre

This performance marked the beginning of an exciting new journey. The new Hawaiian Theatre program has received approval to offer a MFA in Hawaiian theatre, making this the only indigenous theatre graduate degree offered by any university in the world.

“We want to train actors, directors, crew, cast and all sorts of theater practitioners in the community,” said Tammy Haili‘ōpua Baker. “Theatre is a key to promoting Hawaiian language and culture revitalization in the community.”